The construction of the new Line 3 of Sofia Metro is at its final stage – this has been registered by the Minister of Transport, Information Technology and Communications, Rosen Zhelyazkov and the Mayor of Sofia, Yordanka Fandakova, together with representatives
of the medias during the inspection of Stage 1 (the Central part) of the metro Line 3 in the capital.

Currently, two out of four stages of Line 3 of Sofia Metro are under construction – from “Vladimir Vazov” blvd. to Ovcha kupel R.D. with total length of 12 km and 12 metro-stations.

The project is included in the Operational Programme “Transport and Transport Infrastructure’ 2014-2020 and is being financed by the European Regional Development Fund, the national budget and local co-financing.

Stage 2 of Line 3 includes the section: “Krasno selo” R.D. – “Ovcha kupel” R.D. – “Sofia-Pernik” railway line at “Gorna Banya” R.D. with total length of 4 km and 4 metro-stations. The construction of the section through the Central urban area and the metro-depot has started gradually in 2016.

At the object sites of the section 12 main contractors with about 20 subcontractors and more than 25 equipment and materials suppliers from different countries and regions of the country are working.

The overall physical implementation of the Central section as of September 2019 is  more than 96 %, as only finishing activities of the architecture, fitting out of part of the equipment and completion of some of the entrances are left to be done.

The section is expected to be put into operation by the end of 2019 and to carry out around 130 thousand passengers daily.

More about the construction technology of Line 3:

The building of the Central urban area section includes the construction of 8 metro stations and 8 km of two-ways tunnels. The tunnels in the section: “Teatar zad kanala” - Orlov most – “Krasno selo” R.D.” are being built by a specially constructed for the conditions of Line 3 tunnel-boring machine (TBM) with diameter of 9.4 m. The TBM is produced by the German company Herenknecht.

For this purpose the edge structures of the stations, the outside body walls, roofing slate and V-shaped tubes were built in advance around the edge of the tunnel-boring machine for its “dry movement”.

The excavation works are being carried out under the protection of walls and the roofing slate. For the construction of the tunnels with the TBM a base has been established with a dedicated equipment of about 30 thousand of the segments from which the rings are formed, grouped together in a tunnel design forming part of the tunnel design. After passing the tunnel machine through the corresponding station, its interior structures have been completed and the equipment has been installed for the metro and operational systems functioning for safety and traffic management – in total - 18 systems.

The construction is carried out in complex engineer and geological conditions — weak, highly hydrated soils, widespread under the underground waters, passing below rivers of more than 3 km of the route, presence of lens of poor water sands.

Due to the passage under Line 1 and Line 2 tunnels, and in separate sections, in the vicinity of buildings, the main part of the Stage 1 route is situated at a significantly higher depth than those of Lines 1 and 2.

For the construction of the various sub-sites, a large amount of excavation, concrete structures, hydroinsulation, tracks, architectural works, installation of equipment, etc. have been carried out.

The conditions of construction and the deployment of the route in the urban planning have imposed the application of a number of special methods — construction with a shield (TBM) with an airtight downhole camera, with counter pressure in the breast bigger than the pressure of the soils and the underground waters, water flow from the stations and contour, at specific locations, preliminary soil reinforcement through injection of cement solutions or other materials, etc.

The construction of the sections through a Tunnel-boring machine (TBM) is the most secure and safe construction technology in the urban city area in the presence of a thick ground, weak soils and high groundwater levels.

The TBM has started its work from the “Zhitnitsa” depot and therefore “Krasno selo” metro-station and “Blvd. Bulgaria” metro-station are the first stations through which it passes and at which after that the internal structures, architectural layout, business premises and the installation of the equipment and the tracks have been completed. In May 2019 the section has been handed over to Siemens for testing and adjustment of trains and the safety and management systems.

The next three stations through which the tunnel machine passes are “Medical University” metro-station, “National Palace of Culture-2 (NDK-2)” metro-station and “Patriarh Evtimiy” metro-station. At them the main activities and service premises are being finished, and the architectural works are being completed. From September 2019 the tests of the trains and the management and safety systems will start. These first five stations and tunnel sections form the first launch complex “Patriarch Evtimiy” — “Krasno selo” metro-stations.

Finally, the TBM has passed through “Orlov Most” metro-station and in April 2019 has reached the “Teatralna” metro-station, at the cross-road of “Yanko Sakazov” blvd. and “Evlogi Georgiev” blvd. These two stations, together “Hadzhi Dimitar” metro-station at “Blvd. Vassov” form second launch complex, which is expected to be completed also in 2019. At them architectural-completion works are being carried out as well as installation of the equipment and the track is being finalized.

In order to put into service the new Line of the Sofia metro in 2019 construction of a new metro-depot has been completed on “Zhitnitsa” street. It has a building for the management of the track-side development, garage housing, and the maintenance and repair housing for the trains. All 20 trains for the two stages of the new Line are being manufactured and delivered at the depot and they serve for the testing that have started already.

Line 3 is new type of line in principle: with a new generation of automation and safety and traffic management systems; new types of trains with a lightweight aluminium structure, with a new, higher level of automation, ‘GoA3’ and, at a later stage, with an appropriate software and hardware additive it is possible to be switched to the highest level of “GoA4” – automatic movement  without a driver.

Automatically opened by the trains, transparent partition walls between the platforms and the trains, with a height of 1.6 m for preventing accidents or deliberate fall of passengers on the rail tracks; a new type of modern data transmission system and communication with the dispatch centre, etc.

The level of automatic control ‘GoA3’ of the trains ensures a high level of safety, departure and automatic stop with accuracy of up to 20 cm, automatic monitoring of the speed and of the road profile, and maintenance of the allowed speed.

Equipped with asynchronous motors, with energy recovery during movement into breaking mode or by inertia, it allows energy saving of about 28%, smoothness while departing and stopping, as well as due to the light aluminum compartment. Along with the wagon air conditioning it also provides bigger comfort for the passengers.

Simultaneously with the construction of the metro, in some of the sections along the route, a new urban engineering infrastructure is being built – water and supply system networks, street lighting, district heating and gas networks and new road surfaces of specific boulevards. 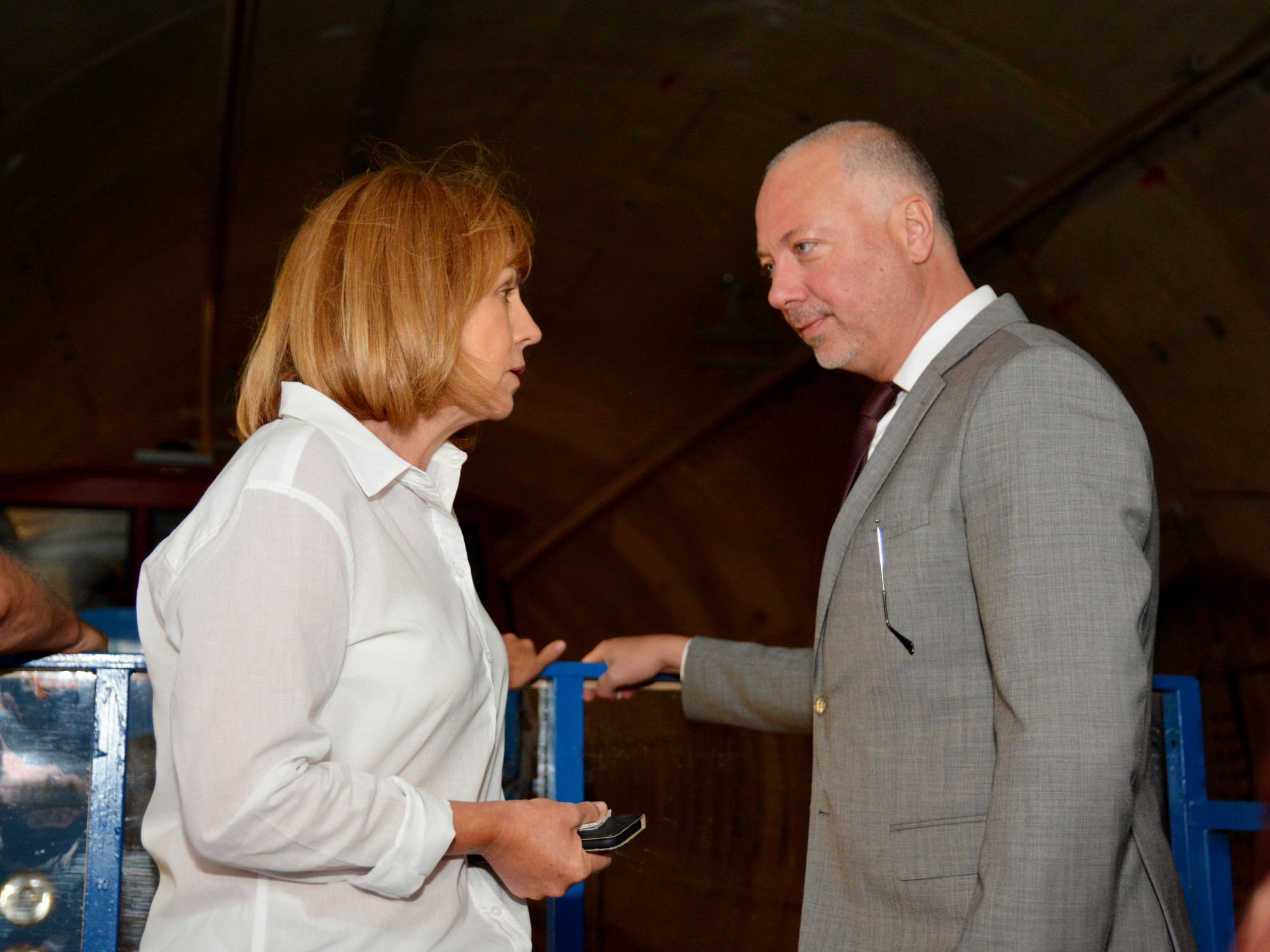 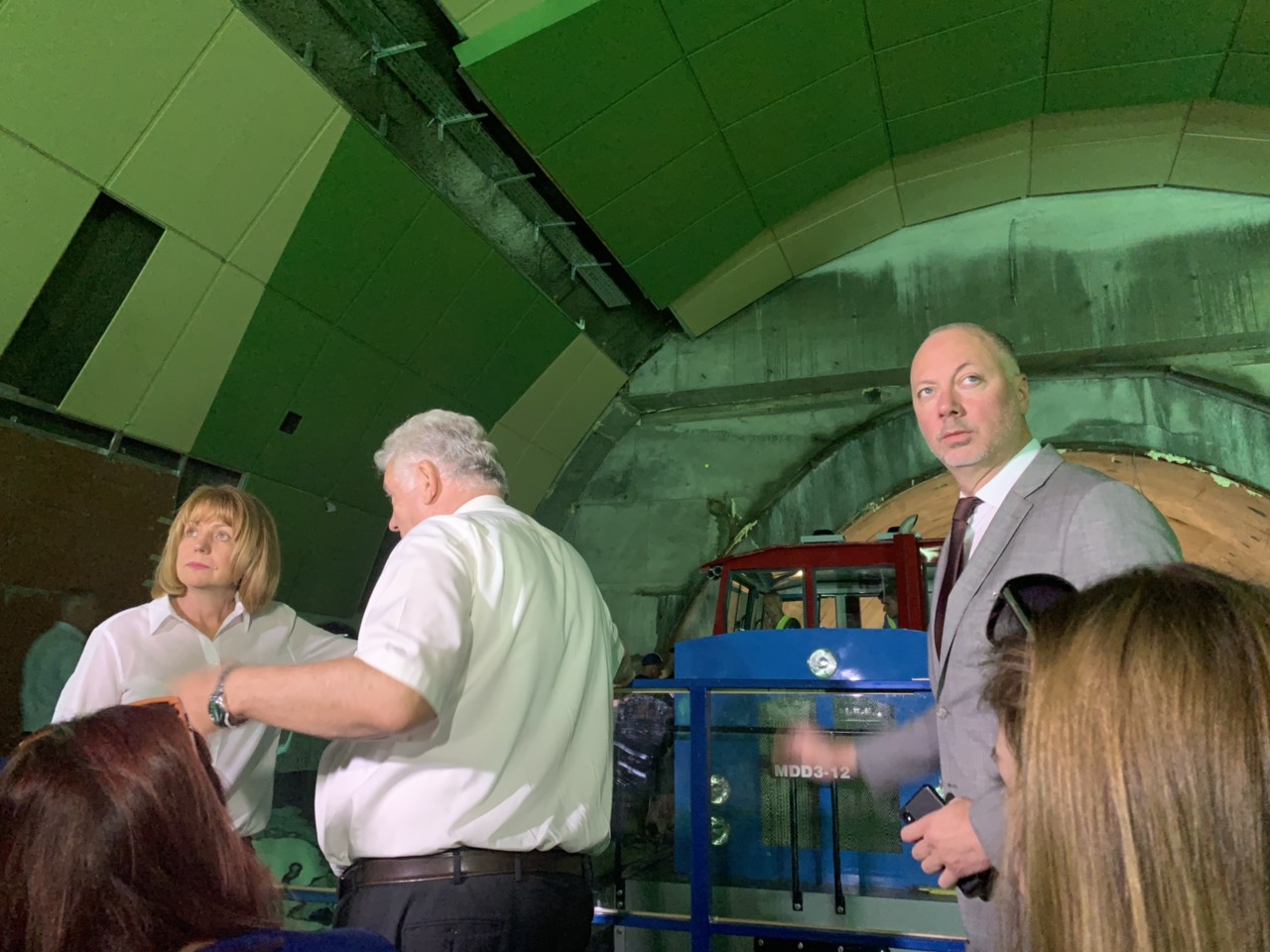 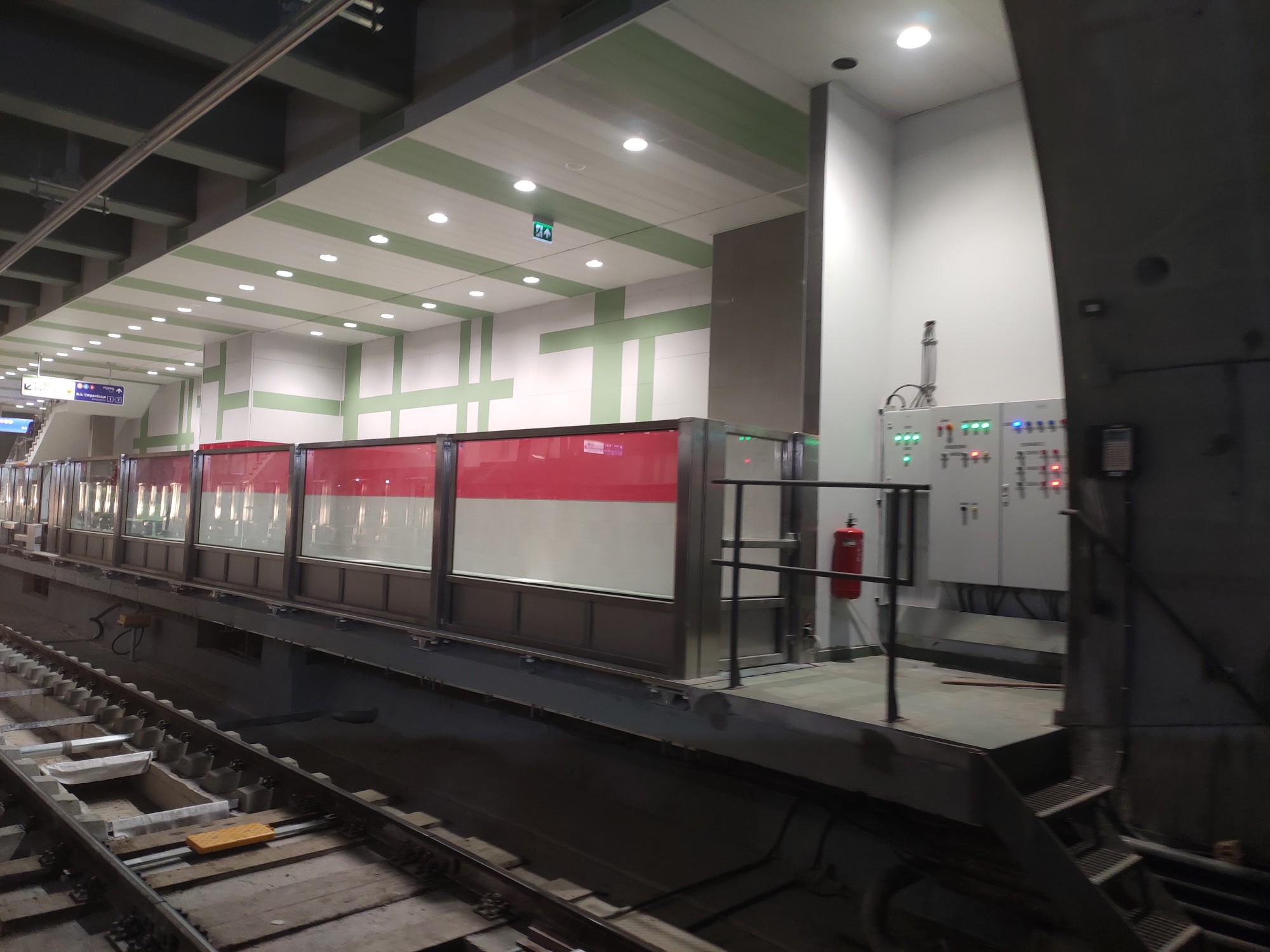 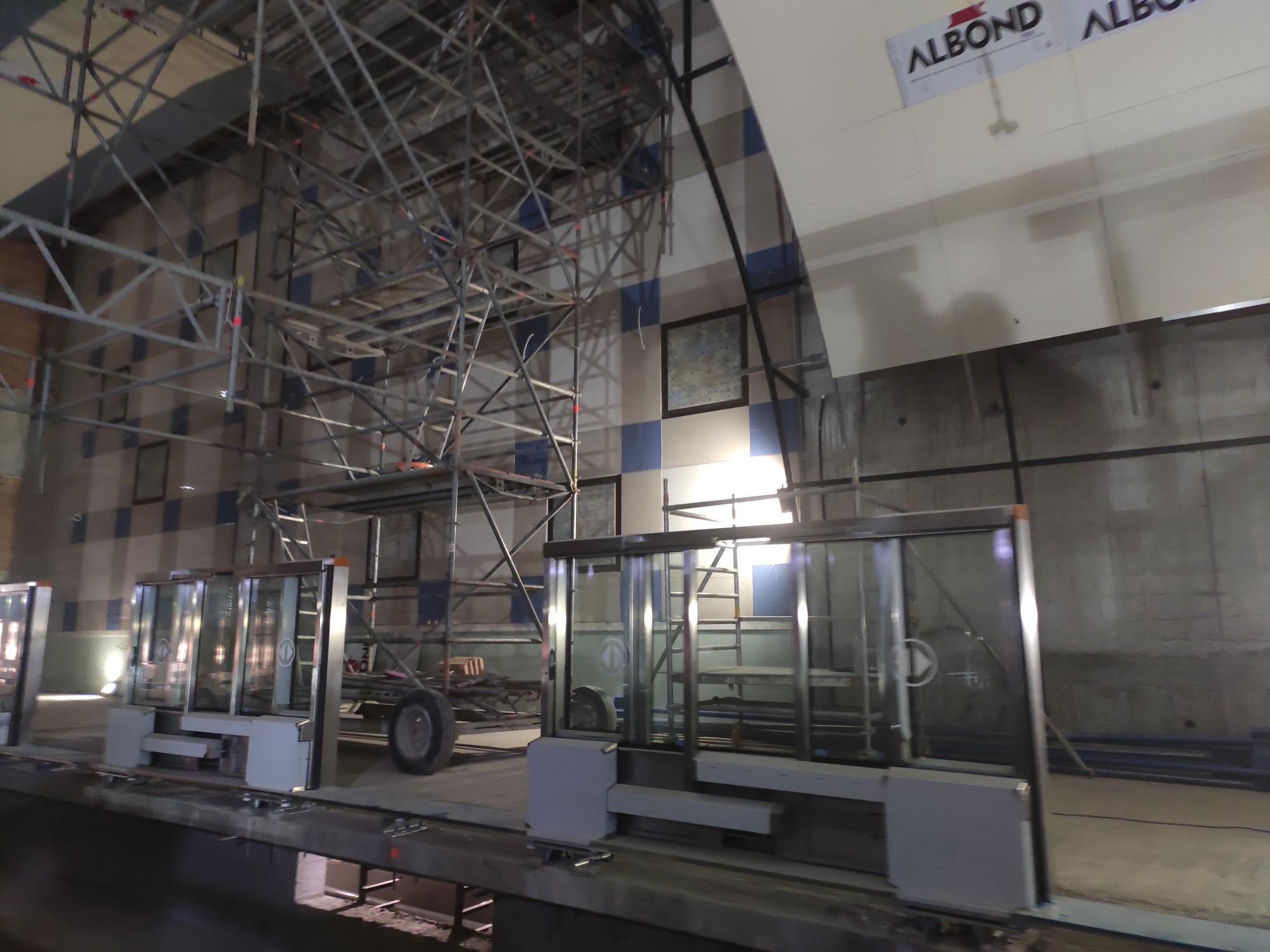